Dancing. What happened to it? Classical dancing like ball-room, tap, jazz, swing remain intact, but modern dancing has fallen off the floor. Does footwork now mean the kicking that someone receives after crossing someone at a rap concert? 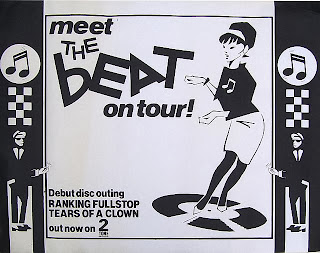 For real footwork, take a step back in time to the seventies and eighties for a glimpse of the footwork performed by, The Stylistics, Temptations, O'Jays, or The Whispers and savor the choreographed agility and synchronized moves of these artists. The 70s and 80s dances were formed by tricky twists and turns and were well choreographed to the beat. Those old school moves and grooves raised your spirit, soothed your soul, quenched your thirst for rhythm and cured your blues. Even the hybrid of "Ska" formed by a blend of a reggae and Caribbean upbeat had its unique steps resembling a cross between a hop and skip known as, "Skanking."

Recently, I found myself transformed back to the early 80s at an English Beat concert. The English Beat are a 2-tone/Ska band who during the early 80s popularized the wearing of pork-pie, Fedora hats and checkered black and white as worn by the 2-tone bands like Selector and The Specials. There were two types of people on the dance floor; those who could skank and those who watched those who could skank. The older people on the floor were those skanking. The younger people in the audience looked on.

On the one hand, remembering how to skank made me feel young again, but reminiscing to my younger friend who was twenty years my junior about how I danced to the Police's, "Walking on the Moon" made me feel old. I looked towards The Beat on stage where the members of that band were now in their fifties. Things looked and felt the same as they always did. The band members were in excellent shape and had as much energy bounding around the stage as they always did.  What's more, I too was in good shape and still had enough energy to skank the night away. My friend left a little earlier in order to get the last train home. I stayed and made my way to the front of the stage, just like I used to back in the day. And like I did back in the day, I cheered for an encore... They came back like they always do and then they left, but not before one of my "old" heroes caught my eye and shock my hand. I melted and felt young again once more. Back in the day blended with today. Today was back in the day.