Stand up to Elephants

A giant question mark hung over the world asking how France would respond to the massacre committed by Islamic terrorists at the Charlie Hebdo office. The answer was a surprise. On that fateful Wednesday of January 7th, 2015, the French did not announce the attack as an "act of war" or declare a "war on terror." And they did not react by calling upon allied nations to bomb or invade another nation in retaliation for such a heinous act. Instead of loading magazines in machine guns, writers and cartoonists joined together in the spirit of satire by putting pen to paper to fire rounds of words and cartoons at the absurdity of the murderous assault on the freedom of expression enjoyed by the free world.

France and the rest of the free-world was not going to be silenced by terror. The world's army of cartoonists delivered an important message on the value of freedom of expression. A plethora of cartoons, street art, and articles condemning the attack emerged over social media, and the press. One cartoonist illustrated the message with a diminutive figure of a terrorist holding a smoking rifle cowering in a corner surrounded by the biggest, and most effective of weapons; an array of pens aiming at him from the sky. Another cartoonist, from the Daily Telegraph responded in defiance with an illustration of a group of terrorists about to storm the offices of Charlie Hebdo and being warned, "Be careful, they may have pens..." 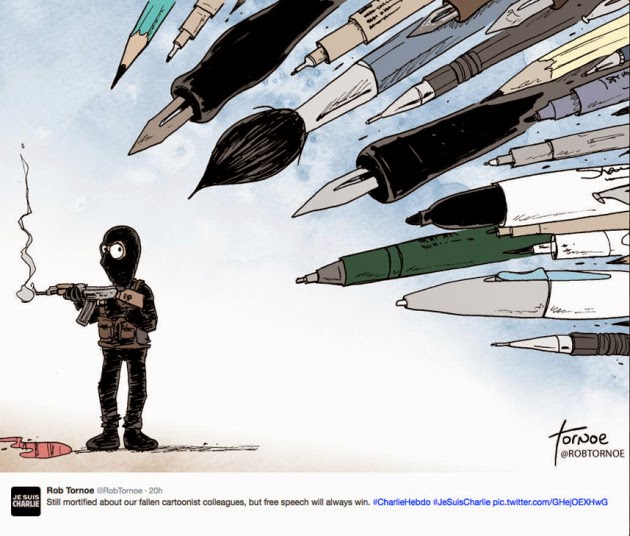 The following Sunday, France and other members of nearby European countries came together to attend unity rallies in Paris and across the country. The unity and solidarity of the rallies transcended age, ethnicity, political affiliation, faith, and socioeconomic status. The scene of one and a half million people swarming around Paris was a moving one. Reporters on national television conveyed the atmosphere and public responses. Francois Hollande announced, "Paris is the capital of the world today. Nothing stops France. With three revolutions; a reign of terror; the Nazi occupation, and subsequent liberation, the people of France know more than anyone, the value of liberty, and freedom of expression.

The French understand that being offended does not afford offended parties any protection from being offended. They do not compromise freedom of expression in the form of excessive political correctness. Nothing illustrates this more when Charlie Hebdo published its first edition after the massacre with a caricature of Muhammad on its front cover with the caption, "Tout est Pardonne'. Alas, media outlets failed to follow suit.

What followed, can only be described as a hypocritical act of betrayal by mainstream news sources when they failed to support Charlie Hebdo. Newspapers published only the top half of the front cover omitting the cartoon of Muhammad. SkyNews in the UK showed the ultimate cowardice in an act of self-censorship by cutting off Charlie Hebdo writer, Caroline Fourest in the middle of a live broadcast when she went to hold up the magazine cover for viewers. The news anchor even went on to "apologize for any offense caused."

It should be no surprise that France is the birthplace of enlightenment that eventually freed her from the reins of oppression by religion and tyrannous monarchies. It should be no surprise that writer, Evelyn Beatrice Hall summed up the French philosopher Voltaire's view of freedom of expression with "I disapprove with everything you say, but will defend to the death your right to say it." The staff at Charlie Hebdo died defending that right. Sadly, we betrayed them.

The rest of us should allow France and Charlie Hebdo to lead by example and not be pinned against the wall by the elephant in the room that is called religion. To deny ideology as a factor in oppression, war and terrorism is to disregard part of the problems of unshakable belief systems. On January, 7th, we were all Charlie Hebdo. Let's not stop there. 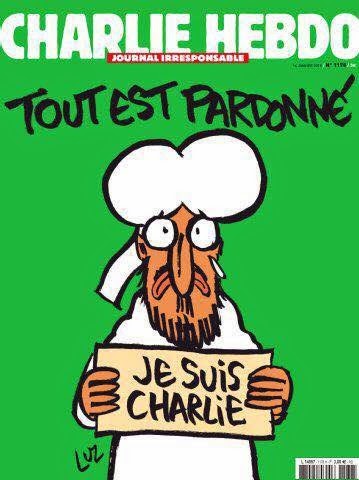 Posted by Adrenoverse at 8:22 PM