On the Road - India Style

The first taste of an Indian freeway is just as rich of an experience as seeing any world heritage sight attracting tourists worldwide. The Indian freeway experience is reminiscent of the old arcade games where you dreaded the "GAME OVER" flashing on the screen. For this real life amusement game, hold tight, look to the shrines on the dashboard for luck, and enjoy the ride because this journey is well worth the money. Outside of the usual cars, tuk-tuks, motorcycles and beautiful trucks adorned with color, the freeway is shared with oxen, cows, goats and their herders; dogs, and monkeys. Indians are very into car-pooling. It's common to see a whole family on one motorcycle, or a tuk-tuk containing more people than you can see. I think my highest headcount as we passed tuk-tuks was about 15 minus the number of occupants that I couldn't count on the inside. I'm being conservative. Our driver, Rakesh, called them "city buses." Sounds like a nightmare? Not really, because freeway driving is actually easy because there are no rules -- only suggestions. The horns of the trucks play multiple melodies that fill the freeways and roads with the sound of a symphony gone terribly wrong. The trucks expect people to sound their horns when passing them and have the friendly request, "Please sound horn" displayed on the back of their trucks for anyone who finds themselves behind them. How they determine which honk is for whom remains a mystery. The animal road users seem the smartest. They stay on the hard shoulder with not much prompting from their herders. The less than smart stray cow lays in the middle of a lane on the warm asphalt and relies on the integrity of the drivers to navigate their way around them. Rakesh explained that the bovine road hogs were actually not such dumb beasts after all. Apparently, the air from the traffic whizzing past the cow keeps the flies off them. As the asphalt cools at the end of day, and when there is less traffic on the road, they leave their lane and graze in the nearby fields. He also demonstrated that the ubiquitous stray dog was smarter than the average Indian pedestrian (although I wondered since I saw a few more ex-dogs that didn't quite make their freeway crossing). He explains, "I honk my horn once and the dog stops." Sure enough he honks his horn and a dog looks and stops. "I hold my hand down on my horn and still people will cross!" And sure enough, a group of pedestrians proceeded to cross in spite of the horn. I conceded that the dog is far better at crossing any road in India than myself -- certainly more daring.

Miraculously, the on the road Bedlam seemed to work quite well, or did it? I wondered just how safe India's roads really were and decided to do some research. According to the World Health Organization Global Health Observatory Repository, 2010 data shows that India had 18.9 deaths per 100,000 (decreased since to 16.6/100,000) in 2013. That certainly isn't as high as Dominican Republic (41/100,000) or Venezuela with 37.1/100,000, but much higher than the United Kingdom, with only 3.7/100,000; about five times times less than their old rulers. America can boast 11.7/100,000; not brilliant, but at least it's much less than India. Accidents involving trucks and motorbikes account for 40% of fatalities. On that sober note, things appear to be a little quieter in the country on smaller roads where modes of transit take the form of camels and carts, horse and carts, rickshaws, makeshift vehicles called, Jugaads, motorbikes and trucks. Interestingly, the more primitive form of transit seemed to move faster than Bay-Area rush hour traffic. However, all is never as it seems. Apparently, the majority of accidents do seem to occur on rural roads as many rustic road users have to share the road with much faster vehicles. Best to stay in the fast lane with the odd slumbering cow statistically speaking... 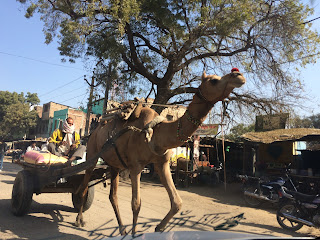 Posted by Adrenoverse at 4:30 PM