A New Shade of Orange

"The serious threat to our society is not the existence of foreign totalitarian states. It is our own personal attitudes and within our own institutions..." John Dewy

Ever since the USA election and BREXIT, I’ve been watching my Facebook news-feed closely. In particular, I have watched with interest, the third party voters in the Presidential election, aka Hillary-haters. Many hated Clinton with particular spiteful rhetoric highlighting their misogyny. Self-proclaimed liberals were among them. Despite their claim of liberalism, or political “independence”, they voted third party even though they knew the high-risk of Donald J. Trump being elected as president and the consequences that his presidency would carry in regard to the supreme court. There was a deep grievance among them for Bernie Saunders not getting the democratic nominee. Their protest votes helped Trump. The third party Jill Stein voters contributed to the Hillary losses in swing states. This, my friends, is partly why we ended up with the alt-Conservatives’ wet dream in the White House. Even those liberals voting third party just could not abide the thought of "crooked Hillary" being in the White House. Trump, an abuser of women, a pathological liar, corrupt businessman, and narcissist conned his way into the White House with lies, regarding immigration, crime, and jobs. The older white woman could not even trump those characteristics. The residing president has denigrated the very office of President with his twitter-storms attacking the press and opposing party and in turn, making the USA the laughing stock of the Western world. The Hillary-haters helped put him there.

Unlike “The Apprentice” that just concerned the contestants, and mere passive viewers, this reality TV show is being aired live to everywhere. Its affects, and effects are felt and experienced by everyone because we are contestants and observers. We find ourselves unable to switch this show off from a remote control. The ramifications of the onslaught on the Environmental Protection Agency, the conservative Supreme Court Justice appointment(s), and the looming death of Roe v Wade lurk overhead. This farce of a presidency has already tipped the balance of the supreme court and will have another chance to get another appointee to the court.

On the other side of the Atlantic, the Brexiteers are still crowing about “sovereignty”, and how they’ve “got their country back”. From what they've got their country back from is not quite clear. What has materialized is that the racists and other bigots are emboldened to abuse people on buses, and trains “to go home.” Somehow they think that is really British. Somehow hurtling themselves back to a 1970s backwater country crippled by tariffs, and brain-draining is more British than being a part of something larger and stronger -- a united Europe.

Now back to the USA side of the pond. Most recently, I have watched the third-party people in response to the separating of undocumented immigrant children from their parents who cross the border illegally proclaiming how, “Obama separated children too”. Note the cognitive dissonance here: they hated Hillary that much, so they justify, or explain Trump, and commit the false equivalence that, democrats and republicans “ are all the same”...

Obama never separated undocumented immigrant children from their parents upon arrival. There was no law mandating such action. The third-party people; AKA (they-are-all-the-same camp) are enablers propagating such nonsense. That makes them no better than the Trump supporters who they imagine they despise. Little do they realize that they share more commonalities than differences with the Trump supporters who sport their MAGA baseball caps while shaking a "Lock her up" sign like a medieval warrior rattling his saber. The difference between them is a shade of orange. The shade of orange people are the third-party, Brexiteers and of course Trump-supporters.

The degrees of magnitude on how the current and previous administration differ are unprecedentedly cruel in terms of vindictiveness, and building adversarial relationships with allies such as the European Union. Other clear examples are children dragged from their parents upon crossing the border undocumented, bans of entry into the USA based on cultural identity (Muslims), publicly mocking disabled people, and referring to a free-press as “fake news” because they speak out against the narrative of the alt-right, or question it. Those illustrations are not characteristic of a healthy thriving democratic country, but that of a near banana republic. The list is endless. I do not recall other republican administrations in very recent decades ever being vitriolic towards pillars of democracy, or hostile towards asylum seekers, refugees, and other undocumented immigrants.

Daniel Jonah Goldhagen explained in his book “Hitler’s Willing Executioners” how ordinary people came to believe that a single agent (the Jews) were responsible for what ailed Germany at that time. Hitler was able to tap into what belief system which was already there. That believe system was in an exceptionalism of the German people. That exceptionalism enabled the Nazis, and much of the population to dehumanize what they did not consider German. Those were groups who they believed to be the source of their country’s problems — the Jews, along with other groups that they deemed deviant, or unworthy of being a member of their cult of a master race.

What was particularly striking about Goldhagen's book (outside of the horrific descriptions of the persecutions during those times), were the similarities between Third-party supporters, Trump supporters, and the Brexiteers and those ordinary citizens in 1930s Germany. The shades of orange people are those “ordinary people” who Goldhagen describes. These “ordinary” shades of orange people maybe your neighbor, some of your colleagues, or your life-long friend from high-school. They might not emerge right away, but I have observed over the last two years, how these people slowly shed their veneer revealing all. Believe it when you see it.

Trump managed to tap into that same near-mystical concept of superiority (exceptionalism), that plagues the USA. Nigel Farage did the same thing across the pond in the United Kingdom by manufacturing the need to leave the European Union through lies and spreading fear about immigration, the NHS, and a disruption of sovereignty. The belief in the British Empire as virtuous, and an almost mystical belief in superiority and the good ol’ days runs deep in the same way as exceptionalism runs deep in America.

The USA and the UK have many things in common one of which is the inherent belief in exceptionalism. Exceptionalism is powerful, and a dangerous belief system because we can justify anything in the name of being superior. Being superior allows us to dehumanize groups, and become authoritarian. The historical outline in Goldhagen’s book shows how ideas are spread like a virus throughout a culture, and passed down from generation to generation.

Richard Dawkins, in his book, “The Selfish Gene” called ideologies “memes”. Memes are passed down like genes. We inherit ideas like we do genetic traits. Ideas spread like virus and replicate, sometimes mutating and becoming more viral -- intense. For example, “Make America Great Again” is a meme that spread like a virus. Nigel Farage’s UKIP campaign poster of, “Breaking point: the EU has failed us all” with a photo not of Syrian refugees, but migrants crossing the Croatia-Slovenia border in 2015. The meme was a lie to deliberately conflate the Syrian refuge crisis with EU-immigration. The meme spread fear, and galvanized xenophobia. Both worked.

Third-party Hillary-haters who just could not vote for Hillary are a mere shade of orange from the current resident in the White House, and his fan-base. This shade of orange has helped normalize Trump by even suggesting that the Democrats held the same policies as this administration. A friend recently described Trump as a symptom of this country. The shades of orange, are the agents. The agents spread the viruses (lies) contributing to this country’s chronic sickness.

The aforementioned countries never looked in the mirror and examined who they were. No introspection. A population does not look inward when they believe they are the best. When you imagine you are the brightest bulb on the tree, you don’t see how bright the other bulbs are shinning too. We are in trouble; a vortex from which we cannot escape. At least not for decades. Right now, there appears to be no antidote for the disease of exceptionalism that plagues both nations. 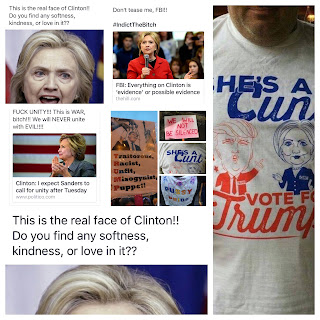 A collage of Facebook posts selected from over 200 screen shots that I took from my feed during and immediately after the 2016 presidential elections.

Posted by Adrenoverse at 6:56 PM