Nobody stopping, just running around
Mouthless heads utter useless words
Always mute to each other's sounds
She's so weary of this restless herd 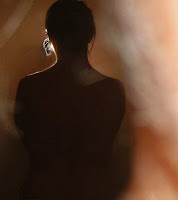 Posted by Adrenoverse at 9:53 PM