My father always used to say, “Why stand up when you can sit down, and why sit down when you can lie down?” I was quick to adopt that line of thinking after trying to draw a circle free hand as suggested by an online tutorial on things to practice. Practice I did, but after filling a sheet of ovals, and scrawls that looked like a two year old let loose with my tools, I eyed my compass set longingly. I eventually relented. First, my journey towards the compass leading me to my final destination of a ball-bearing.
I persisted a little bit more with my circle drawing. The circle was not perfect, but I rolled with my “spherical” creation and got to work on the shading per a couple of tutorials. The shading turned out a little better than my free-hand circle-drawing. The small drawing on my scratch paper resembled a rather nice tomato which was completely unintended, but that’s okay. I like tomatoes. Usually, still life is drawn with a real life visual or a photo. I chose an image of a fancy expensive ball-bearing. More on ball-bearings later as they have a fascinating history. Bear with me.
The objective of the sphere-drawing exercise was to get practice with shading objects, and highlights with a realistic shadow. My larger free hand orb, turned into a loaf of squarish bread. It was this result that I applied my father’s rule of thumb about sitting up when one can lie down. 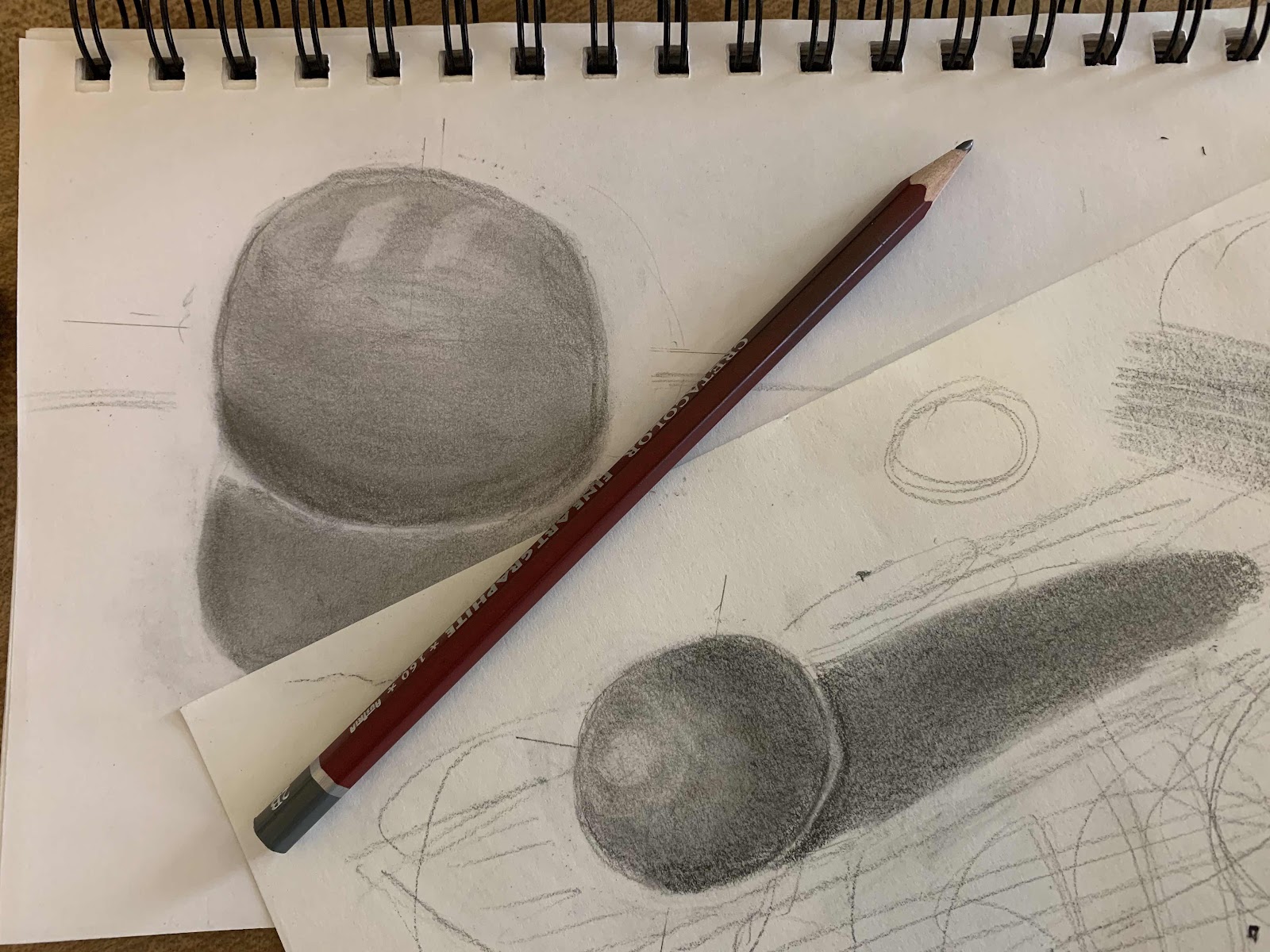 So why try to draw a circle free hand when I have a tool called a compass that does the job perfectly? I decided to employ the easiest, and most comfortable route that would draw a perfect circle. I relented to the compass beckoning to me and reminding me of what perfect circles it can draw.
I quickly had a perfect circle at the size I wanted rather than what my hand thought I wanted. I could focus on the goal of magically turning my circle into a sphere by practicing what I had been shown in the online tutorials which by the way are fantastic. So yes, while I agree it is good practice to draw shapes free-hand, if I want to produce a perfect sphere, I will employ my compass for the task!
My first sphere was done using a method of pre-determining the light source and shadow using some geometry by using ellipses to determine the where the light hits the surface, and the light fades to dark, and how long the shadow will be using points on the sphere.. I thought that was fascinating. I used graphite for the first sphere on my small sketch/practice pad, and then turned to charcoal pencils for my larger piece. 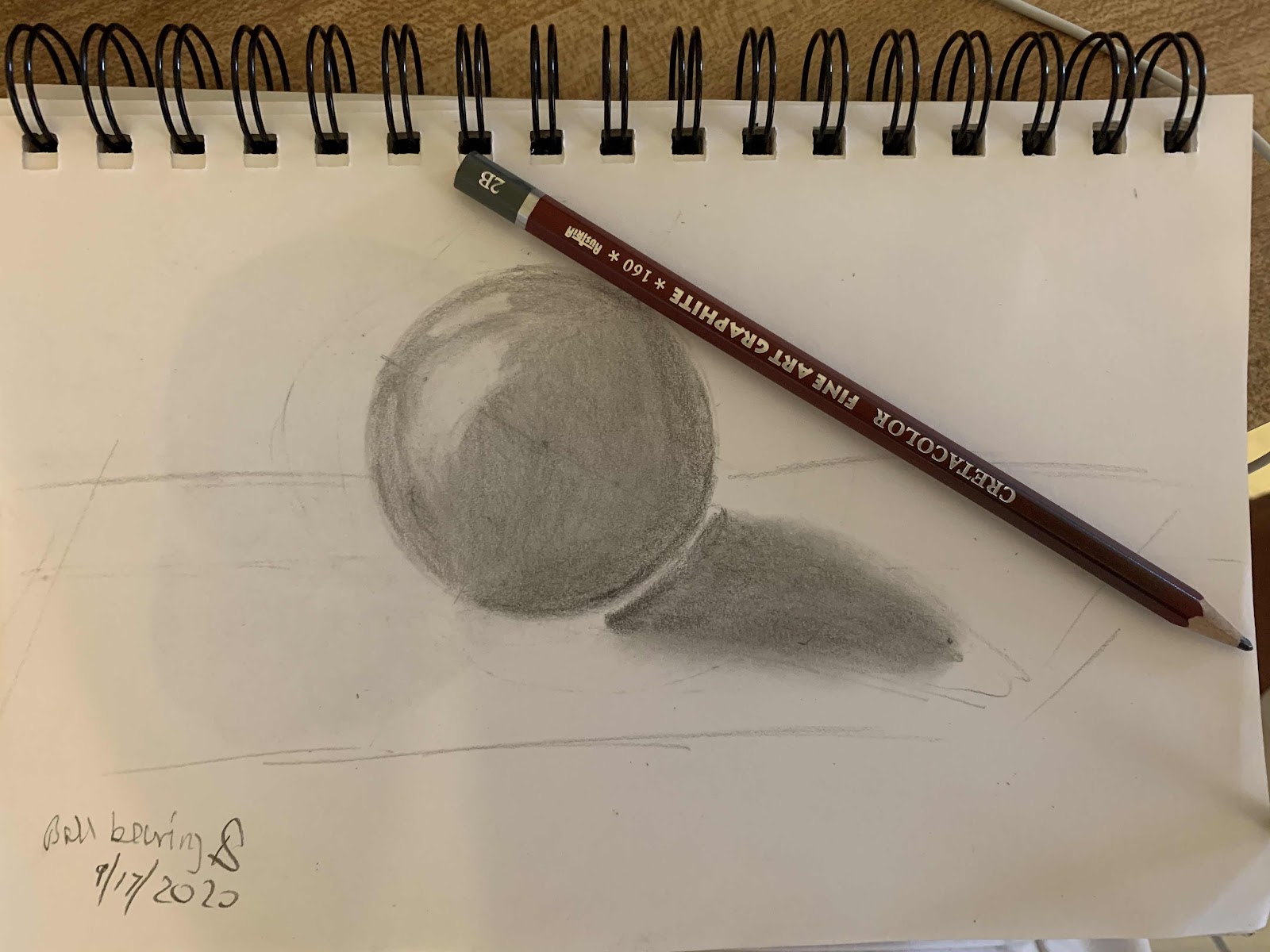 And finally to round things off, my final sphere (ball-bearing) drawn with a compass and charcoal pencils (I used my stick willow charcoal for the background.) I feel reasonable happy with the result although my shadow could probably have been a bit longer. I’ll round off now with a little more about ball-bearings. 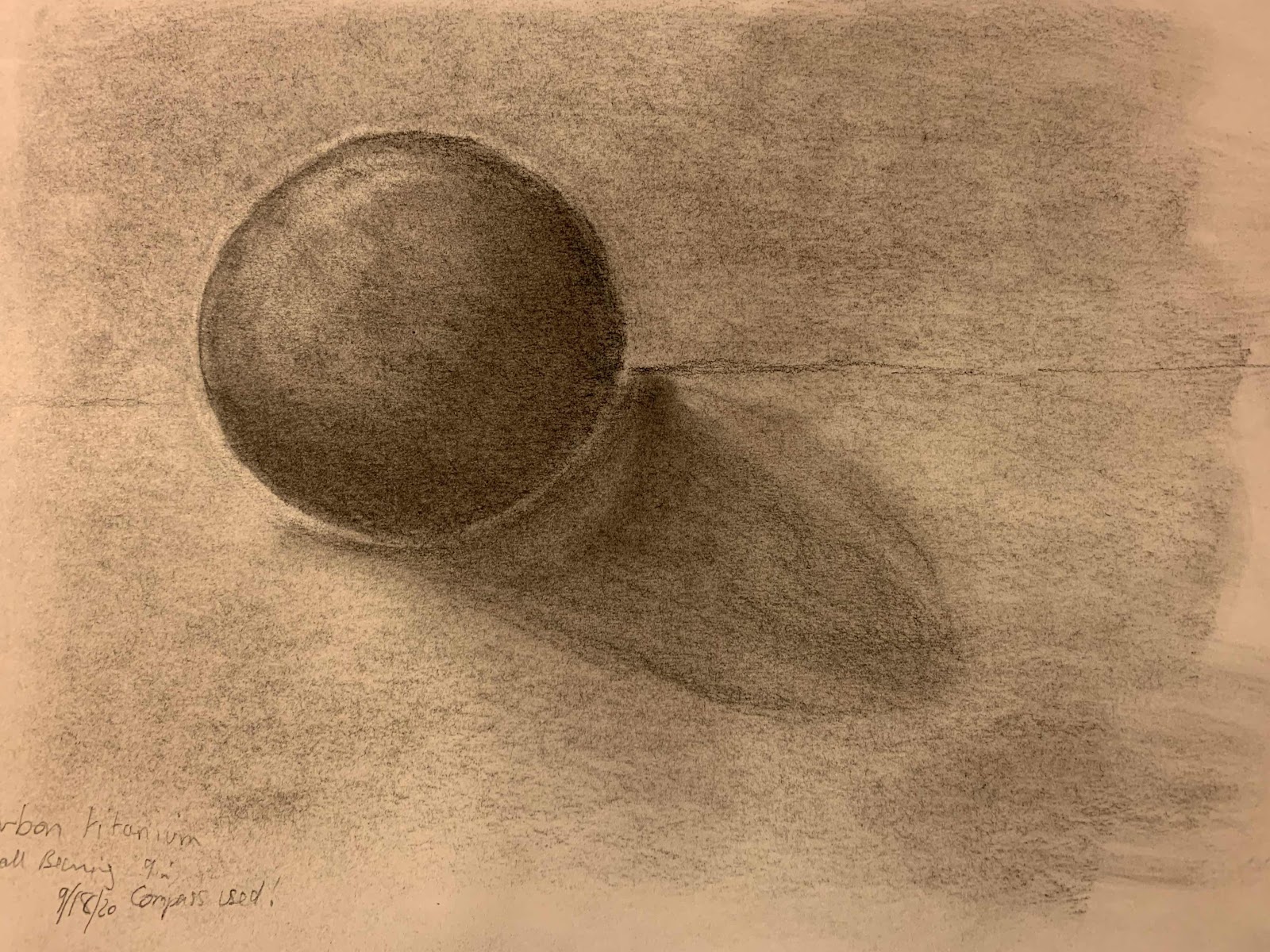 So why a ball bearing? Ball-bearings are quite a simple technology. Their usage dates back to ancient Egyptians who used rollers to move large stones. They used the technology to build the pyramids (sorry Erich Von Däniken fans). The rollers were made of wood. Leonardo di Vinci is credited with inventing the ball bearing in a racer groove designed to reduce friction between two moving surfaces. However, the first patent was awarded almost 300 years later to Philip Vaughan, an Iron master from Carmarthen in 1794.
I find it fascinating how this ancient technology is still employed in various applications, and improved upon. Nowadays, ball bearing are a bit more complex and the technology expanded to take care of shifting loads and forces. They are made of various metals like stainless steel, chrome, silicon nitride (ceramic), and titanium carbide.
Ball-bearings are virtually everywhere. Where this is a rotational moving part in an appliance, or machinery you will find ball-bearings. Off the wall applications are skate boards, and fidget spinners (remember those?).
Another little interesting factoid is that ball-bearing factories were often the targets of bombing raids by the the British in WWII that would severely hobble the German war industry. That’s how significant ball-bearings are. So, here’s to balls, big, and small, where would we be with out them all?
Leonardo di Vinci Drawings of Ball Bearings
Posted by Adrenoverse at 7:38 PM