No place to Hide

I get dressed donned in my tight denim skirt, denim tight sleeveless vest, leather boots and leather waistcoat, and holiday Christmas glitter nail polish. I'm pleased with my party get up as I look at myself in the full-length mirror, and I feel good -- sort of. But the slim figure, I feel, is slim due to my lack of appetite. A constant nausea -- a sense of loss fills my stomach instead of food. I eat because I must work and get through school. I must make an effort. I walk into the party.

People are laughing, talking, dancing and drinking... I head to the bar -- dutch courage. I often like this environment, but tonight is different. Very different. I feel alienated, aloof and detached. Funny, I've been feeling like this a lot these days. But here I am with no place to hide.

Snap out if I think. So I try. I walk up to two people I know. I walk up, smile (forced) and try to engage. After listening for a while (which feels like an eternity), I stop and glide away. I feel invisible. No, I AM invisible. It's not my imagination. "Have another drink. Maybe you're just not relaxed", says an inner not so convincing voice of the rational.

I try again. It's no good. I'm invisible yet I feel exposed with no place to hide. I leave and the door closes quietly behind me. I feels like it's the only thing that will know I've left.

I can't wait to get back to the apartment. Home hasn't even been that sweet either. My marriage was suffering -- buckling under the weight of depression. I'm working hard to hide my darkness from the light of day. I get to the apartment lobby and in full view of the enormous window exposing myself to the night, I sit and cry... I try to text a friend, but can't see the words I type... I abandon the text. I climb the stairs, enter our apartment, shower and quietly go to bed... My husband doesn't stir. I lay in the dark both metaphorically and literally...

Getting ready is now the best part of a party... But what's the point when I leave feeling worse and more depressed than before. I want to sleep and not wake up. Sad, but true. It's true what they say; loneliness is often felt more in a crowd than alone. All is not lost and I slowly plan to work towards a full recovery.

Another door closes, but stays just a little ajar in my life. I've opened the door to another life... I can now only participate in small groups at best, but really prefer one on one interactions with a close friend or partner. Priorities change. I find solitude in a long distance trail run. It's where I find peace, feel free from anxiety, alone, invisible, and with no place to hide...

The door is always ajar, but I work hard to keep the crack of light and to stop it closing completely. Depression is real, complex and multi-faceted. Don't ever ignore someone, or anyone for that matter. It can slam a door shut...

Posted by Adrenoverse at 6:44 PM No comments:

As we passed through the Silicon Valley of Delhi, the difference between the shimmering glass towers of Google and the abject poverty of the poor across the freeway was insultingly striking. Here, the 21st Century and the 16th century are merely separated by a freeway.

As we slowed to line up at the toll gates, disheveled figures appeared from nowhere like apparitions gliding up to the windows of waiting trucks, buses, and cars. A figure taps on our car window pointing to a bundle of rags holding a baby. I observe how occupants in the other vehicles react to the now plentiful number of beggars. I'm struck by how the occupants of the cars behave when approached by these beggars. They act oblivious to this spectacle and treat the people as if they are invisible. The scene is wretched and pathetic. We only have large bills -- no small rupees to hand out. I look down and try to avoid eye contact like everyone else. I'm uncomfortable, guilty, and sad. The window-tapping figure eventually moves on to the next car.

At the time, I was ignorant of much of the uncomfortable truth behind the notorious amount of begging in India. According to various human rights organizations and UNICEF, begging is often run by organized crime and it is advised never to give money. This is much easier said than practiced when a young "mother" is pleading for money for milk, but giving is actually the very worst thing you can do because it does nothing but perpetuate the problem of what has been described as human trafficking. Apparently, the babies are often rented out and even drugged to give the listless appearance of the child which often garners more money. The money is then shared between the beggar and the person renting out the baby. This and many other scams are the ugly sides of what is a truly magnificent country. Nevertheless, underlying poverty is the driver of such exploitation of children.

I'm left unable to reconcile this abject poverty with the immeasurable wealth of this country. Corporate giants, temples and palaces adorned with fine marble and gold shine in the faces of the poor and destitute destined to a hash life by no other reason than by accident of birth that places them into a low caste. Although the caste system was outlawed by secular India, the system is firmly ingrained within peoples' minds and still practiced. However, India is evolving and the caste system is heavily criticized among religious reformers. The government has anti-discrimination laws that are designed to protect the lower casts from discrimination.

As we drive through some poor areas, people are cooking on make-shift kerosene stoves, and children running around barefooted (but not unhealthy looking). I observe people at water-pumps at the end of the street washing clothes, bathing and collecting water. Stray cows, goats, boar, pigs and dogs, graze on rubbish from the markets. Nothing goes to waste. We see a bunch of cow dung formed into neat little piles of flattened patties baking in the sun. Our driver explains that cow patties are collected, dried and used for fuel. One has to admire the resourcefulness of people in this country. However, the resourcefulness is borne out of necessity rather than social conscience. Our driver, Sherma explains that the problem of poverty and high birth-rates among the poor is attributed to no access or very little access to education. In the cities, the working and middle-class see education as the single most pressing factor to a "good life."

Our driver continues to explain how people, including himself, work themselves into the ground to secure their children a good education -- often one their parents never had. I feel hopeful that this attitude is how India will continue to evolve and become less economically polarized. Unlike the drive from Delhi to Jaipur, the progressiveness that India aspires to will take far longer. But like the journey to Jaipur, they will get there.

"Organized begging is one of the most visible forms of human trafficking—and it's largely financed and enabled by good-hearted people who just want to help."

A detailed report of begging by the Delhi government. Stats and figures show at least 20% of child beggars are coerced.

Begging for a Childhood - Analysis of child begging in Delhi 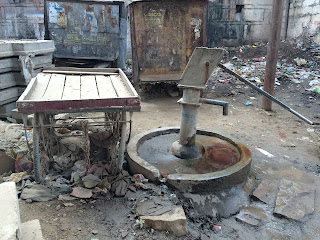 Posted by Adrenoverse at 3:11 PM No comments: